Bell 8’s project stems from a fascination with waves, sound, physical, emotional, sexual, all dances on a micro-macro level.

Stephon Alexander, author of The Physics of Jazz,  says, “If our cosmic origins are seated in sound patterns, is it too far-fetched to think that music viscerally enables us to tap into those origins?”

One can learn about the Egyptian roots of sound healing by seeing Ani William’s Sound Alchemy Documentary Sound therapist Joanna McEwen includes in her Ted talk a fascinating sound file of 2 cells, one healthy, one stressed created by Dr. James Gimzewski – titled the “Song of a living cell.”  She also alludes to how vibrations and different emotional intentions can affect water as seen in Dr. Masaru Emoto’s Water Experiments.

Dennis Hlynsky, a professor at RISD Rhode Island School of Design, traces the ephemeral paths of birds. Donna Eden, the author of Energy Medicine, offers insights on how to see energy and manage its dance within us.Bernie Krause and his Great Animal Orchestra Trained as a musician demonstrates that each species has its own acoustic niche and ecosystem.

Inspired by WPA concerts in parks, pianist Hunter Noack performs on his 9′ Steinway in the wild. inalandscape.org 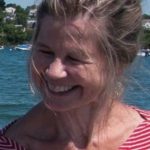 grew up in the woods and sailing on Long Island Sound. The producer of LA CHANA, an award-winning documentary directed/produced by Lucija Stojevic, she produced the Dance on Camera Festival (1994-2012) co-sponsored by Film at Lincoln Center, and developed 110 touring partners for Dance Films Association, an installation on Prospect Park Lake Portals, A Floating Cinema, and an interactive production of Ferdinand – Dancing with Bulls.